Our son William, the inspiration for Special iApps, has been a star patient and helpful tester for Simon Berry over the years! We invited Simon to share with everyone how his new Visual Fixation System device can support children with learning disabilties.

My name is Simon Berry, I'm an Optometrist and I invented the “Visual Fixation System.” It is a device that helps grab the attention of someone who finds it difficult to concentrate during an eye test. The idea for it came from trying to measure a patient’s focusing ability. 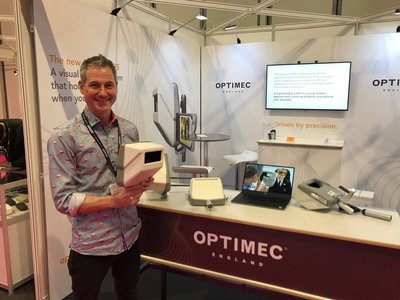 Being an Optometrist means that I need my patients to look directly towards me, or towards the ‘torch’ I am shining at them. If they are not interested and won’t look in my direction then I can’t do my job. Many patients find this difficult and it can be particularly difficult for patients with a learning disability or autism. An eye test can be a scary experience for someone who doesn’t know why they are there or why this strange man is wanting to shine a light in their eye. 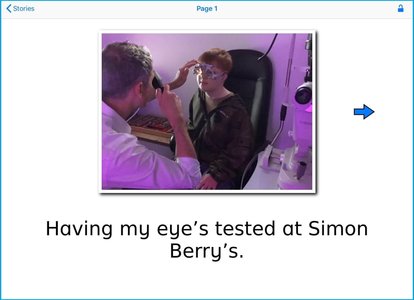 Special Stories - William having an eye test with Simon

My son is a very happy fun person to be around. He also has a learning disability. He has been described as having “global developmental delay.” Which basically means that no-one really knows what his diagnosis is.

When he was younger and I looked at his eyes, I noticed he had the same problem focusing as some of my patients with Down syndrome. I also noticed that this problem depended on what he was looking at and whether he was interested in it. If I examined him when watching Thomas the Tank Engine then his focusing was pretty good. If he was looking at an early learning maths book, his focus was terrible.

This made me realise that it was very important when measuring accommodation that I knew my patient was engaged and properly focusing on the target I was showing them. Otherwise I would get a false result.

One of the other problems is that all methods of examining focusing ability currently available use a target that is held to one side of the measuring device. Ideally, Optometrists want to measure focusing ability at exactly the same point as where the target is being held.

Fast-forward four years of prototypes and testing and my Visual Fixation System has just been launched. It is being manufactured by a company from Worcester called Optimec. It uses a mobile phone as a target. This means I can display anything that will relax my patient and keep them interested. It has optics that allow the patient to watch the phone while I examine their eyes.

Now I’ve started using the Visual Fixation System (or VFS) I’ve found that it is much more useful than I intended from it’s original design purpose. It can be used for any technique where a Doctor or Optometrist wants the patient to look directly at them.

I use it to grab the attention of patients that don’t really want to engage with me. I find it particularly useful for patients with autism because the VFS hides my face and means that patients don’t feel uncomfortable about eye contact. I can use the VFS to check whether glasses fit correctly, or look at how the muscles of the eyes are working, or to look at the back of their eye to check it is healthy.

I now find it invaluable when examining a patient that finds it difficult to co-operate. I have used the device with young babies, patients with learning disabilities and patients with dementia.

The Optimec Visual Fixation System was launched in April 2019 but it’s going to take a bit of time to catch on. Many Optometrists and Doctors don’t know it exists yet and many are happy using methods they have always used.

I’m hoping that some of you reading this, if you feel it is a good idea, might be able to help spread the word and get this device used across the UK and beyond. I have found that it is parents and carers that can see the worth in the device because they know how difficult an eye test can be for someone with a learning disability.

Myself and Optimec are happy to answer any questions about the device and arrange demonstrations for anyone who is interested. It would also be great if people could share their experience of the Visual Fixation System. I think this is the only way that we may get this device accepted into our healthcare system.

Get in touch with Simon and Optimec to learn more!