Special Words already had more than one voice for some languages: a choice of male or female in German and Norwegian, and Netherlands or Belgium in Dutch. Now it also includes 3 voices in British English: child, male and female.

Colin and Bev's son Joseph, who at age 11 was the original voice of Special iApps in 2011, has reprised his recording for us. Andrea Lyons, whose voice you may recognise from our My 1st Signs app and some of our add-ons for Special Words and Special Stories, has lent us her voice again.

IMPORTANT NOTE FOR iOS USERS: If you downloaded or updated Special Words on your iPad or iPhone between 20th and 28th December 2019, please update again. The version we released on 20th (4.3.0) introduced a serious problem that could cause British audio to be silent. This was resolved in the updated version (4.3.1) on 29th. 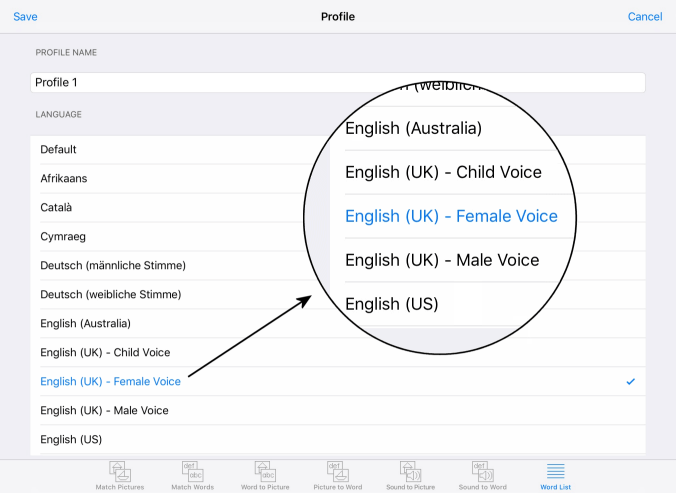 To select a specific voice for a word list (profile), on iPhone or iPad go to Word List > action button (top right) > Manage Profiles. Tap the ⓘ button for the relevant profile, and select from the list of languages.

Android and Chromebook users go to Word List > Menu > Profiles >. Tap the arrow > to the right of the relevant profile.

Work on Your Spelling!

Did you know that if you have created your own lists of words in Special Words, you can re-use them in our new Special Spelling app?

For further details, check out our User Guides.