Inspired by my Son William

As well as being C.E.O. of Special iApps, I'm mother to two sons. William (pictured with me) was born in 2005 with Down syndrome, duodenal atresia, Hirschsprung's disease, hearing impairment, and thyroid deficiency. Later, he was diagnosed as also having autism. Joseph, who's 6 years older than William, features as the British voice in many of our apps, and has gone on to train as a doctor.

Little did I realise that a chance meeting in the Apple Store in January 2011 would lead on to Special iApps. Lesley shouted across the store You must get an iPad for William! and those 7 words led me to Mandy who asked the poignant question Which apps?. Having a child who communicates by sign, has very poor motor skills, gets easily distracted ... got me searching, only to find apps that were unusable, unsuitable or not quite what I had in mind.

Developing our own Apps 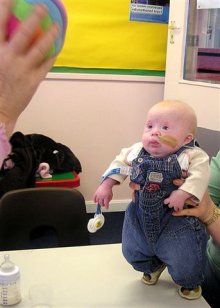 My husband Colin and I met when we both worked in IT many moons ago. We had only used an Apple Mac occasionally; our phones were 6 years old. However, a mission to write something usable, interesting and educational transformed us into mobile app developers.

Our first app, Special Words, was ready to launch by the end of Summer 2011. We found 16 iPhones, iPods and iPads owned by friends who helped us refine the app, with over 40 children testing it. Nathan volunteered to design our original branding, and others offered to help translate, initially into 8 languages.

In 2012, Barbara Lowe became our first employee, developing our branding, producing the artwork for the apps and photos for our website.

Our Journey So Far

We attended a conference hosted by Down Syndrome North East when William was about 3 months old. By chance, having queued for lunch, we sat at a table where we met a number of parents who were involved with The Education Centre for Children with Down Syndrome (ECCDS).

From when William was born until then we had been living in the RVI hospital in Newcastle, where he had undergone complex surgery, and it was the first time we'd met other parents of children with Down syndrome. Little did we know that the majority of the people at this conference would join our growing circle of friends as the years passed.

I vividly recall the phone call I had the following day with Maggie Hart, who founded ECCDS. I can still picture walking from the car park into a special school corridor, past wheelchairs and rooms that I peered into, when we went to our first ever ECCDS session. Entering a noisy room, we were greeted by big smiles and warm gestures from volunteers and families as they bustled through activities. I remember holding William up on the table to track a brightly coloured ball and then buying an identical one to use at home with him.

Since then, we have had a huge amount of support from numerous individuals and organisations and we are now providing a range of apps for children around the world in over two dozen languages. Warmest thanks to all those who have supported our project and so helped transform my vision into reality.

I was overwhelmed and honoured in June 2018 to be appointed a Member of the Order of the British Empire, for services to exports in educational technology for people with learning disabilities.

I feel this is not just about me, but rather a tribute to everybody who has made a contribution, however big or small, to my vision.

Mobile devices are powerful learning tools for all. It's not just about writing our own apps. Our mission also includes supporting schools, charities, parents and professionals, and enabling more children to access this technology alongside traditional methods.