If we have sent you a Promotional Code to download one of our apps free of charge, please follow these instructions carefully

A promotional (or promo) code can be used only for the store it was issued by (Apple App Store or Google Play Store), only for the app it relates to, only once. It is strictly non-transferable. However, if you have more than one device (e.g. an iPhone and an iPad) associated with a personal store account (not a business or educational account), you can install the app on all the devices. Promo codes are not available for the Amazon Appstore.

A promotional code must be used within 4 weeks of being issued, or before a newer version of the app is released, whichever is sooner. If you delay until the code has expired, we will normally not be able to issue a replacement code. If we have given you a code prior to the public release of an app, you can use it straight away, and so have the app before it is publicly available.

It is not possible to redeem an App Store promo code through Apple School Manager. If you're a teacher in a school and we have given you an Apple promo code to redeem, you need to do this on an iPad that is configured to use the normal App Store. 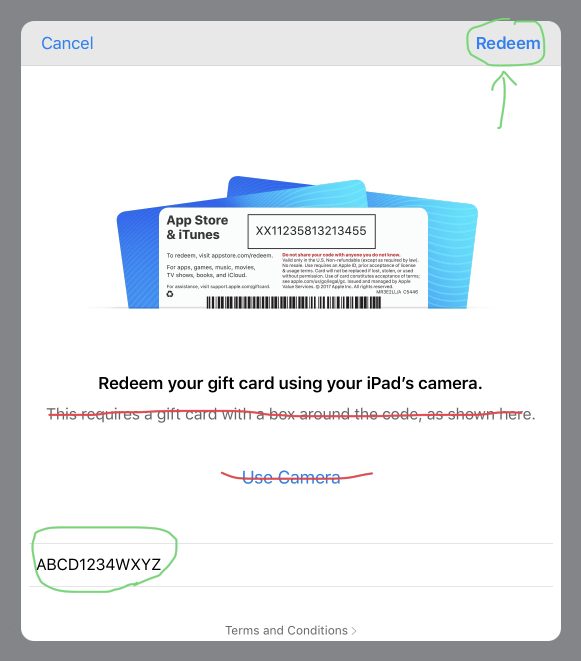 Redeeming an App Store Code from an Apple Mobile Device

Visit this web page from Safari on your iPad, iPhone or iPod touch, enter the 12-character promo code in the box below and tap the Redeem Now button.

This should open the App Store app. If asked to sign in, use your usual Apple Store credentials (Apple ID).

In the App Store, your code should be visible at bottom left. Ignore any message about using the camera or requiring a gift card - just tap the Redeem button at top right, as shown in the screenshot here (tap to zoom). This will download the app to your device.

Redeeming a Google Play Store Code from an Android device

Visit this page from a web browser (e.g. Google Chrome) on your Android device. Enter the 23-character promo code in the box below and tap the Redeem Now button.

This should open the Play Store app. If asked to sign in, use your usual Play Store credentials (Google ID). Tap the Redeem button. This will download the app to your device.

If we have given you codes for more than one app, repeat with each code in turn. If you have any difficulties, please contact us.

Once you have used a promo code to download an app once, the code cannot be used again. However, if you have more than one device associated with the same store account, you can then download for free to any of your other devices, in the same way you would for any previously purchased app.