In this activity, the aim is to be able to compare two quantities and to indicate whether they are the same or different.

Two pictures are shown, and 2 answer buttons. Tap the left button if you think the pictures contains the same number of items or the right button if not.

If you are correct, a reward is presented. If you are wrong, you have the opportunity to correct your answer. After the reward, a blue arrow button allow you to move on to the next pair of pictures.

By default, the left and right buttons are identified by a happy face and a sad face, but other options include a check (tick) and a cross, as shown in the screenshot. 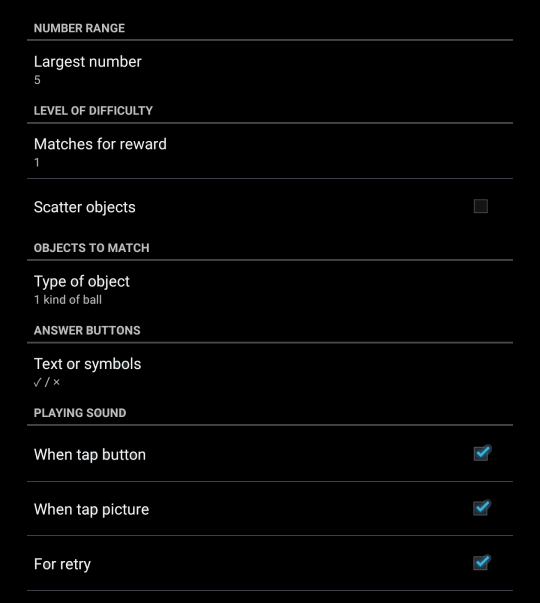 This sets the maximum number of objects to show in each picture. The default is 5: you can set it to between 2 and 20.

By default, you only need to match one pair of pictures for a reward. You can increase this to more pairs, in which case a vertical progress indicator appears between the pictures to show how far you are towards the reward. The range is from 1 to 10.

The objects in the pictures are normally shown in a regular arrangement, starting at the top left, and going across, then starting the next row, up to a maximum of 4 rows of 5 objects. If you turn this setting ON then the objects are instead scattered randomly among the 20 possible positions.

There are 4 options for what's displayed on the two answer buttons: happy and sad faces (default), the words ‘Same’ and ‘Different’, the symbols ✓ and ✗, or the symbols = and ≠.

If this sound setting is ON, the word ‘same’ or ‘different’ is spoken when you tap the correct answer button. Turn OFF to disable this.

If this sound setting is ON, tapping each object in either picture speaks a number, from 1 for the top left object, counting upwards, and tapping an unoccupied part of the picture speaks the total. You can use this to help finger count the objects before selecting your answer. Turn OFF to disable this.

If this sound setting is ON, the words ‘try again’ are spoken if you tap the wrong answer button. Turn OFF to disable this.