Special Numbers User Guide - How Many? 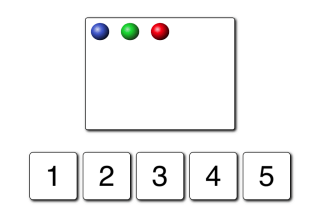 The aim of this activity is to be able to count a set of objects and then identify the corresponding written number from a series of numbers.

The objects (balls or animals) are show in in a picture above a horizontal line of number cards. Tap the card which displays the number of objects in the picture.

When you tap the correct card, the other cards are hidden and the number spoken for reinforcement. If you tap the wrong card you have the opportunity to correct yourself. After correctly identifying each quantity, a blue arrow appears allowing you to move on. After showing pictures corresponding to all of the cards in turn, a reward is presented. 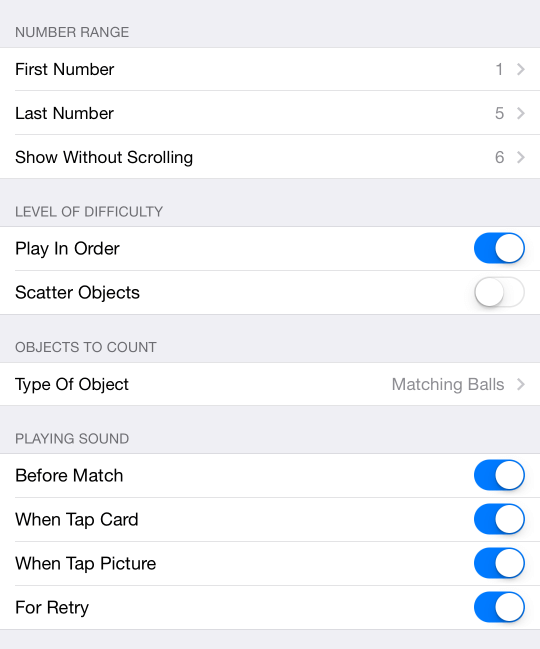 This sets the number for the left most card, and can be between 0 and 20. The default is 1.

This sets the number for the right most card, and can be between 0 and 20. The default is 5. The cards are always laid out in order.

For cases where you have selected a large range of numbers, you can configure how many cards appear on the screen together, and so prevent them looking too small. By default, this is set to 6, and this is the smallest allowed value. So, for example, if you set First Number to 1 and Last Number to 10, only 1, 2, 3, 4, 5 and 6 would initially be visible. It's then possible to scroll through the cards by dragging any one of them to the left or right, to reveal the hidden ones.

This is ON by default, meaning that the number of objects in the picture are presented in order, e.g. first 1, then 2, and so on. If you turn it OFF, the pictures appear in a random order, e.g. 3, 1, 2, 5, 4. When this setting is ON, the cards are automatically scrolled left or right for you if necessary, so that the correct one to tap is always visible. If it's OFF, you must scroll for yourself if the card is not in view.

The objects in the picture are normally shown in a regular arrangement, starting at the top left, and going across, then starting the next row, up to a maximum of 4 rows of 5 objects. If you turn this setting ON then the objects are instead scattered randomly among the 20 possible positions.

You can choose the objects to show in each picture: Matching or Mixed balls, animals, flowers, pencils or bugs. Mixed means each object is randomly selected from the available ones; matching means they are all the same.

If this sound setting is ON, the quantity is spoken when the picture and cards appear. Turn OFF to disable this.

If this sound setting is ON, the number is spoken when you tap the correct card. Turn OFF to disable this.

If this sound setting is ON, tapping each object in the picture speaks a number, from 1 for the top left object, counting upwards, and tapping an unoccupied part of the picture speaks the total. You can use this to help finger count the objects before selecting your answer. Turn OFF to disable this.

If this sound setting is ON, the words ‘try again’ are spoken if you tap the wrong card. Turn OFF to disable this.