The aim of this activity is to recognise and match equivalent quantities.

There is a row of fixed cards along the top half of the screen, and moveable cards appear one at a time in the bottom half. You need to place the moveable card over the corresponding fixed card, by doing either of the following: 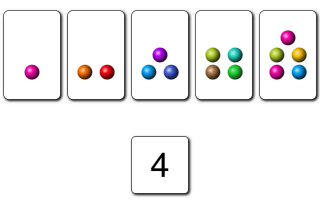 Once the moveable card is in the correct position, it cannot be moved again. There is no penalty for moving it to a wrong position - you can keep moving it until you get it right.

A variation on this activity hides the moveable cards and requires you to just listen, and tap the correct fixed card when you hear its number spoken.

The first quantity to match: between 0 and 20. The default is 1.

The last quantity to match: also between 0 and 20. The default is 5. You can set the last number to be smaller than the first number, to count backwards.

For cases where you have selected a large range of numbers, you can configure how many fixed cards appear on the screen together, and so prevent them looking too small. By default, this is set to 5; the smallest allowed value is 4. So, for example, if you set First Number to 1 and Last Number to 10, only 1, 2, 3, 4 and 5 would initially be visible. It's then possible to scroll through the fixed cards by dragging any one of them to the left or right, to reveal the hidden ones.

This is ON by default, meaning that the moveable cards are presented in order, e.g. 1, 2, 3, 4, 5. If you turn it OFF, the moveable cards appear in a random order, e.g. 3, 1, 2, 5, 4. When this setting is ON, the fixed cards are automatically scrolled left or right for you if necessary, so that the one to match is always visible. If it's OFF, you must scroll for yourself if the relevant fixed card is not in view.

You can choose from a wide variety of objects to represent the quantities on the fixed cards: Number Cards (the default), Number Line, Lowercase Words (e.g. ‘two’), Uppercase Words (e.g. ‘THREE’), Balls, Clock Faces, or Dominoes. There are 3 ball options:

When using clock faces or dominoes, the highest values for First Number and Last Number are limited to 12: if you set values between 13 and 20, 12 will be used instead.

A similar choice of objects to those for fixed cards is available, except that there is no Number Line option. There is also an additional Hidden Matching Cards option: if you select this, the nature of the activity changes: instead of presenting each moveable card, only the number sound is spoken, and you must tap the corresponding fixed card - a matching card then appears over it.

If this sound setting is ON, the quantity is spoken when each moveable card appears. Turn OFF to disable this.

If this sound setting is ON, the number corresponding to any card is spoken when it is tapped. Turn OFF to disable this.

If this sound setting is ON, the quantity is spoken after a correct match. Turn OFF to disable this. 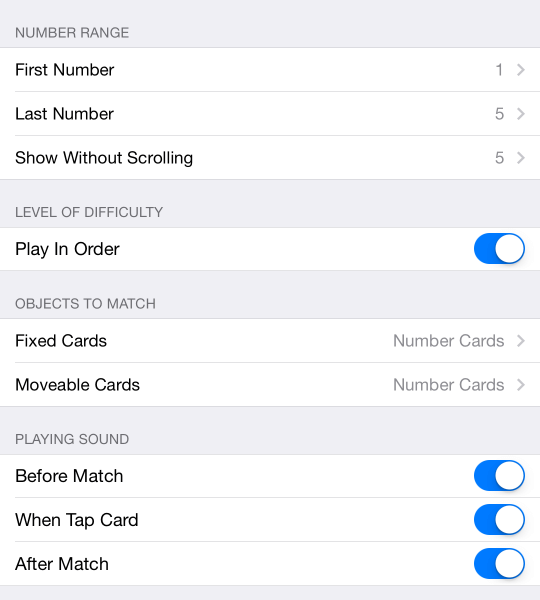 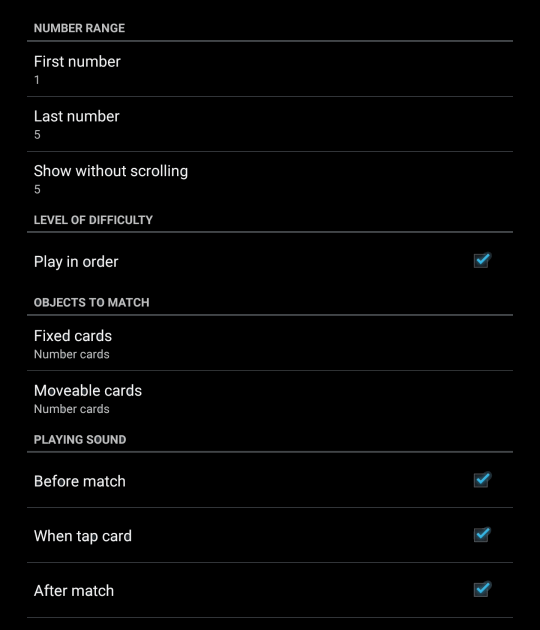