This activity is all about being able to rearrange jumbled numbers into sequential order. There are two playing variations: either dragging cards to a number line, or ordering them in place.

In the default variation (shown in the screenshot), a number line appears across the top half of the screen, and the cards to order are scattered in the bottom half: the aim is to drag the cards to their correct positions on the number line. Once a card is in the correct place on the line, it cannot be moved again. There is no penalty for moving it to a wrong position - you can keep moving it until you get it right. 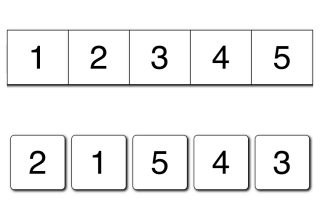 In the alternative variation, there is no number line, and the cards to order are scattered across the centre of the screen. In this case, you order them so that the smallest quantity is at the leftmost end, by dragging to the left or right, and as you move one card the others move automatically to make room for it.

In either case, once the cards are in the correct order, a reward is presented, and a blue arrow appears, allowing you to repeat the activity. 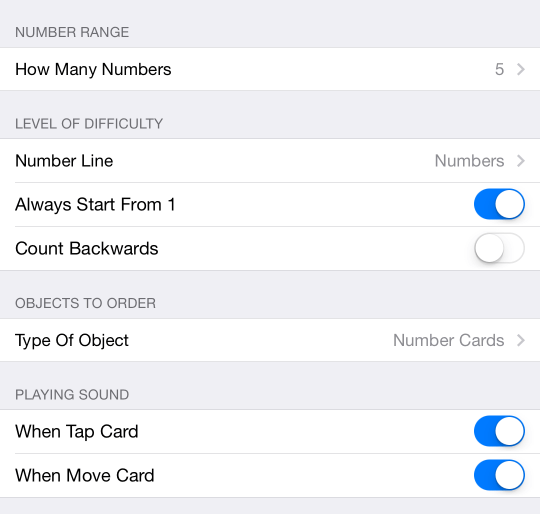 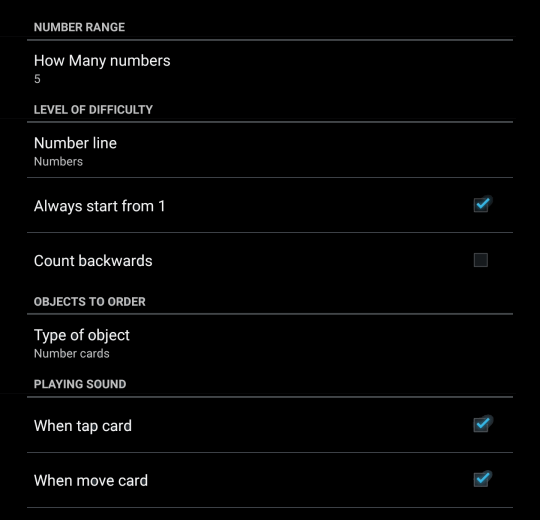 The total number of cards to show, between 3 and 20. The default is 5. The cards are displayed progressively smaller in size as you increase this value: unlike in some of the other activities, there is no scrolling option (as it would conflict with dragging the cards).

There are 3 options here:

Numbers - a number line with digits (as shown above)

Blank - a blank number line without any digits

None - selects the variation of ordering the cards in place

By default, this is OFF, and you need to order the cards so that the smallest quantity is at the left hand end and the largest at the right. Turning ON reverses the order you need to arrange the cards into.

You can choose from a wide variety of objects to represent the quantities on the cards: Number Cards (the default), Lowercase Words (e.g. ‘two’), Uppercase Words (e.g. ‘THREE’), Balls, Clock Faces, or Dominoes. There are 3 ball options:

When using clock faces or dominoes, the highest values for How Many Numbers is limited to 12: if you set values between 13 and 20, 12 will be used instead.

If this sound setting is ON, the number corresponding to any card is spoken when it is moved. Turn OFF to disable this.