To create a new topic, start by tapping the + button in the main view. You are now ready to create the first sentence for the topic. This also acts as its default title page, so the text and picture you add here will be displayed in the main view to identify the topic. You can change the topic's title later, as explained in Chapter 5. 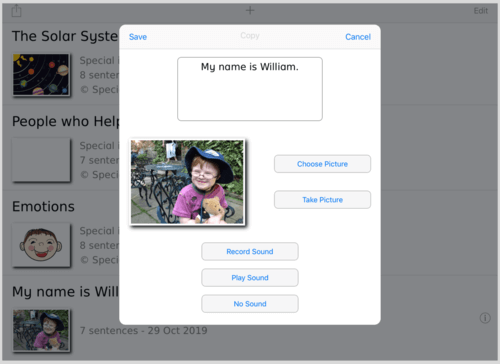 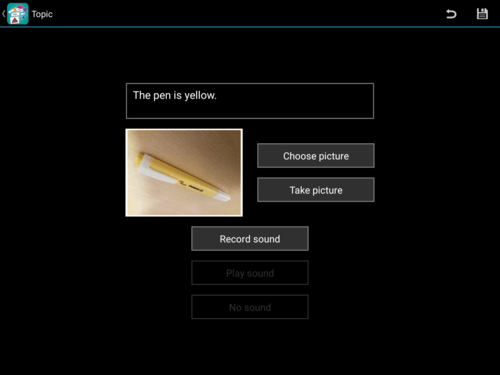 Tap in the text area to add the text for the first sentence: use the on screen keyboard which appears.

To set the picture, either tap Choose Picture to select from the photos in the device's Photos app / Gallery, or tap Take Picture to take and use a new picture using the device's camera. For devices with 2 cameras, you will be able to choose which one to use. If the device doesn't have a camera, the Take picture button will not be present, and you can then only choose pictures already on your device.

Pictures should ideally be in landscape orientation, with an aspect ratio of 4:3 (width:height). Those with different aspect ratios will be shown in the activity with white gaps on either side or above and below. If using the camera, take the picture with the device held in a landscape rather than portrait orientation.

To record your voice saying the sentence, tap the Record Sound button, speak, and then tap the button again. If you don't want to record any audio, tap the No Sound button instead.

When you have set the text, picture and sound, the Save button at the top right will be enabled: tap it to confirm your changes.

You're now looking at the list of numbered sentences in your new topic. As yet, you only have 1 sentence. To add another sentence, tap the + button, and add text, picture and sound, just as you did for the first page, and save again. You can continue to add as many sentences as you like now, or come back and add more later.

After you've added a few sentences, the editing view of the topic might look something like the example on the left. If the text for a page is too long to display in the editing view, it will be shown truncated with "..." here, but there is more room to display them in the activity. 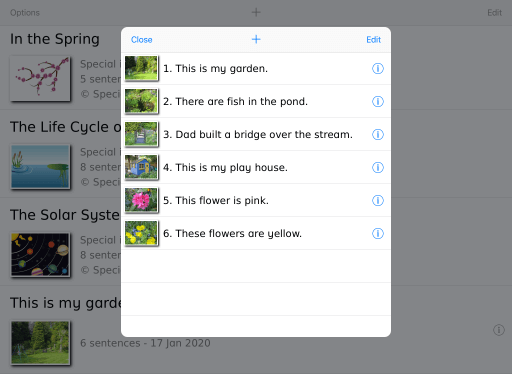 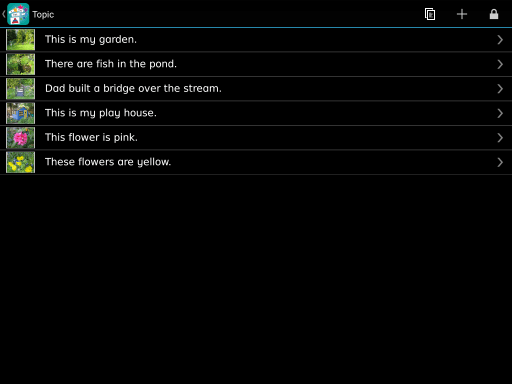 You don't have to have a picture for every sentence in a topic, although it's generally a good idea to include a picture on the title page. You can delete the text and/or the picture, either when first creating a sentence (as described above) or when updating the topic later (see Chapter 5).

To delete the picture from a sentence, swipe across the picture beside the Choose Picture and Take Picture buttons, and confirm when prompted. A red cross will appear, as shown on the right, indicating that when saved this page will have no picture. 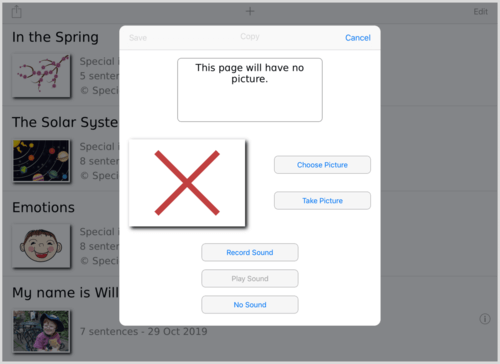 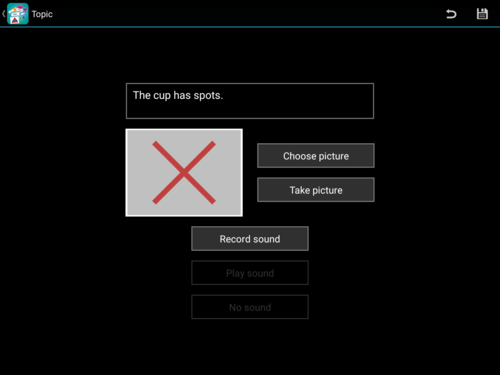 To delete the text, swipe across the text box, confirm, and similarly a red cross will appear in it.

You can always go back and add new text, new picture or sound later, and any picture you previously added will still be in your Photos (unless you also deleted it there).